2019 was a good reading year for me. That is not always the case, but I am grateful when it happens. According to Goodreads, I haven't read this much since 2011 and 2012.

I enjoy seeing what other people are reading. I check out the lists... Favourite authors recommendations, Barack Obama, Bill Gates, Celebrity Book Clubs, Award winners, Top One Hundred and Top Ten lists, and basically anyone who is willing to share what they have read. I then add whatever seems interesting to me to my ever growing, never depleting, To Be Read (TBR) list.

For those who also like to check out book lists, I am throwing my hat in the ring. My top books this year include fiction, non-fiction, young adult, a couple of Indigenous writers, a courtroom drama mystery, memoirs on education and genocide and some very interesting characters.

Every Note Played by Lisa Genova

- one of my favourite authors. This story is about Richard, a man diagnosed with ALS. You feel like you are part of the story; you know the characters. They have been part of your life and you've been a part of their lives. You feel every emotion alongside them.

- also one of my favourite authors. the story. the characters. the writing. I loved everything about this book. Saul Indian Horse, a northern Ojibway man tells his powerful story to find peace.

The Clay Girl by Heather Tucker

- I have never read a book written like this before. Tucker's writing has stuck with me and so has eight year old, Ari who is a determined young girl with a lot of spunk and gumption.

- We all know this story of the worst high school shooting (at the time). Cullen writes this very well - the shooters, their families, the shooting, the victims, the survivors and the aftermath - the reader can visualize it all. Have we really learned from this?

- The courtroom drama mystery that I had to get other people to read so that I could talk about it. Thank you to those people. I still think about this one a lot.

- I was not expecting to like this book as much as I did. I loved it. Tara Westover's story is incredible. From no schooling, to self education and eventually a PhD - against all odds. Unbelievable that this happened (and is happening) in my lifetime. What a story!

The Marrow Thieves by Cherie Dimaline

- This is considered Young Adult (YA) but I think it's for everyone, like I think The Book Thief by Markus Zusak is for everyone. A dystopian novel in which only the Indigenous people of North America have the ability to dream. This puts them in grave danger and we are taken on a journey of two young people and their attempt to survive.

The Kitchen House by Kathleen Grissom

- confession - I had started this book when it was chosen for a book club and couldn't get into it. Second attempt - I devoured it and loved it. Excellent characters and a story that stays in your soul. This book is told by a seven year old white girl and an 18 year old black slave in late 1700's, early 1800's.

Shake Hands With The Devil by Romeo Dallaire

- It is not a secret that some of my heart lives in Rwanda and that I am a fan of Romeo Dallaire. This book sat on my shelf FOREVER... after two other attempts at reading it... this year, the 25th anniversary of the Rwandan genocide, I promised myself I would read it during the 100 days of mourning and remembering. So glad I did. Not an easy read, but an important one.

Where The Crawdads Sing by Delia Owens

- This book got a lot of buzz this year and I can understand why. A strong female character, love of nature, and a story that had me guessing. A lot of love for the Marsh Girl. A New York Times article states that it sold more print copies than any other adult title this year - fiction or non-fiction. Very impressive for a debut novel. 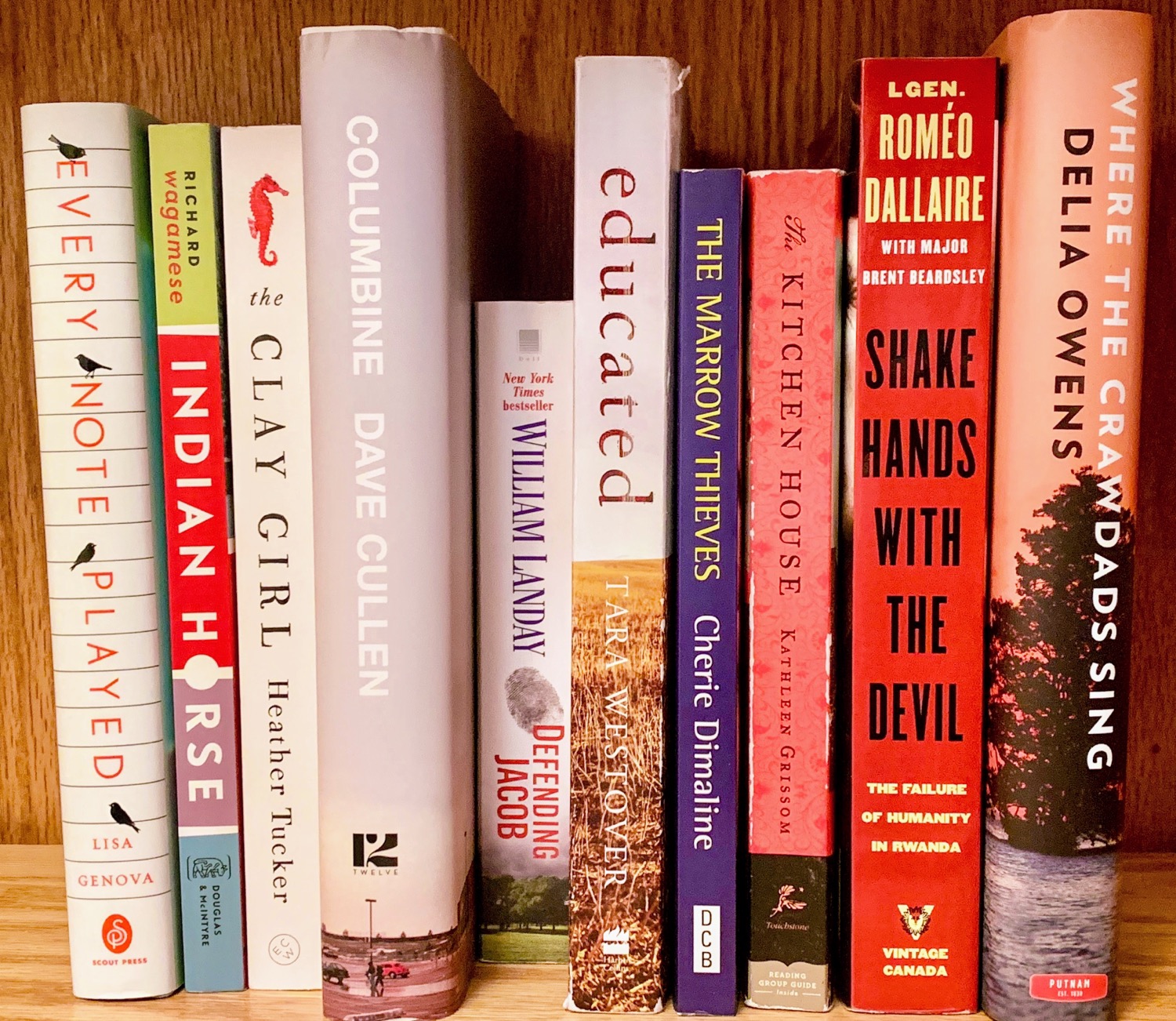 1. The Clay Girl by Heather Tucker

2. The Tattooist of Auschwitz by Heather Morris

3. The Bell Jar by Sylvia Plath

5. Tell Me More by Kelly Corrigan

8. The Illegal by Lawrence Hill

9. The Nest by Cynthia D'Aprix Sweeney

10. The Soul of an Octopus by Sy Montgomery

12. The Course of Love by Alain de Botton

17. Every Note Played by Lisa Genova

18. I'll Take You There by Wally Lamb

19. The Marrow Thieves by Cherie Dimaline

20. The Hope That Remains by Christine Magill

21. The Secret Life of Violet Grant by Beatriz Williams

22. That Time I Loved You by Carrianne Leung

26. An Unwanted Guest by Shari Lapena

27. Sapiens: A Brief History of Humankind by Yuval Noah Harari

29. A Mind Spread Out on the Ground by Alicia Elliott

31. The Lost Years by Stacey Ritz

33. At The Water's Edge by Sara Gruen

34. Owls in the Family by Farley Mowat

35. The Kitchen House by Kathleen Grissom

36. Shake Hands With The Devil by Romeo Dallaire

38. The Emperor of All Maladies by Siddhartha Mukherjee

39. An American Marriage by Tayari Jones

40. Prince of Tides by Pat Conroy

42. The Boat People by Sharon Bala

46. The Masterpiece by Fiona Davis

47. Feeding My Mother by Jann Arden

49. Daughter of Moloka'i by Alan Brennert

50. The Great Alone by Kristin Hannah

51. The Stand by Stephen King

52. Talking to Strangers by Malcolm Gladwell

53. The Right to be Cold by Sheila Watt-Cloutier

54. Lazarus, Come Forth by John Dear

57. The Plains of Passage by Jean M. Auel

59. The Weight of Blood by Laura McHugh

60. The Shelters of Stone by Jean M. Auel

61. The Goldfinch by Donna Tartt

62. Calling Down The Sky by Rosanna Deerchild

63. Where The Crawdads Sing by Delia Owens

64. The Land of Painted Caves by Jean M. Auel

65. Run Away by Harlan Coben

67. A Slender Thread by Diane Ackerman

68. A Persistent Peace by John Dear

"Keep reading. It's one of the most marvelous adventures anyone can have."